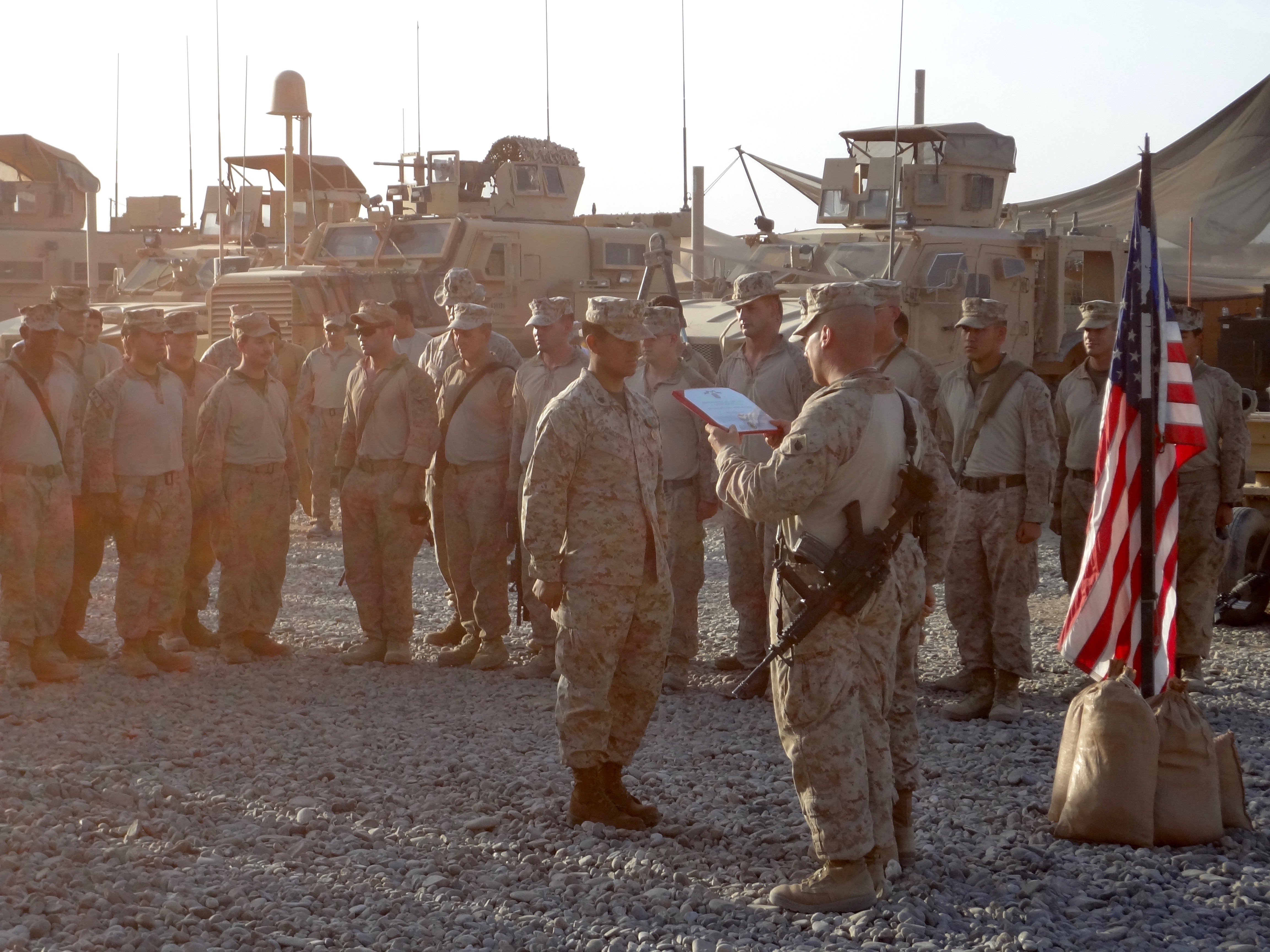 Afghanistan, ‘The Grave Yard of Empires’, – as it has become known – consists of 34 provinces, the most infamous of which – its name now synonymous with death and destruction – being Helmand.  The following is a short account of my involvement there during 2010 – 2011, and is written in respect and admiration for the Marines I worked alongside with, and for those that didn’t make it back from those long, hard, 13 months in Helmand, Afghanistan.

Helmand Province is one of Afghanistan’s largest – approximately the size of West Virginia, and is situated in the south of the country.  In the north of the province are the ruggedly beautiful white peaks of the Hindu Cush, the snow covered massif providing the source for the Helmand River, the dark brown water winding though the arid valleys and on to parched Afghan plane, which to the south borders Pakistan.

The life giving water of the Helmand River, allows farming to take place in an area which for all intents and purposes a desert.  The mineral rich soil, irrigated by channels coming off the river, allowing lush fertile ribbons of green to flourish either side of the water course, permitting – dependent on the crop – two yields a year.

But the area is known for another harvest – a far more lucrative one – the brown latex scraped from the bulbous heads of poppy plants, producing opium, the base material for the white powder which is in so much demand in the West, and is commonly known as heroin.

Helmand Province produces 80% of the world’s opium, the perfect crop for the region according to counter-narcotics’ experts, because of its high resale value, and the ease with which it is stored and transported. Poor farmers are even able to borrow money from the Taliban, using their crop of opium resin as collateral.  But that’s only half the story; by far the biggest cash crop in Helmand’s is cannabis.  In short, Helmand is a model of entrepreneurial endeavour; a factory for producing illicit drugs, the profits from which run into several billion USD, with the Taliban taking between 10 – 20% as their share.  But all this wealth comes at a cost.  The vast revenue that is received from the drug trade makes the area unstable, its population far more likely to be manipulated and coerced by drug traffickers, and of course the Taliban.

But who are the Taliban?  Most have seen news bulletins of blacked robed men with large beards and turbans riding around in pickup trucks brandishing AK47s.  They are the areas ‘bogey man’, but their designation is not so clear-cut, as there are many different groups that have been lumped together by the media and foreign governments, into this all-encompassing name.  (I’m not going discuss their groupings, and affiliations here, but if you would like to learn more, ‘Taliban’ by James Ferguson is an excellent read.)

Taliban in Pashtun means students, and that’s exactly what they were when they were called upon by their leader – Mullar Omar – to take up arms.  They filled a power vacuum in the era after the fall of the of government led by Dr. Najibullah in 1992 – the communist backed president meeting his end, by being dragged through the streets of Kabul, castrated and tethered to a truck before being hanged from a streetlight.  Fifty in number and recruited from Mullar Omars madrassa (religious school), they began as a de facto police force, with their initial intentions being admirable, in an era where law and order was nonexistent.  As their reputation grew, the Sharia law which they propagated soon became accepted amongst the conservative Pashtun tribal area, and it wasn’t long before Helmand and the rest of the southern Afghanistan fell under their control.

Mullar Omar outlawed the growing of poppy when the area came under his influence, citing the activity as un-Islamic, but the respite didn’t last long.  With the invasion of the country after the attack of 9/11, production resumed, the Taliban desperate for funds to support their insurgency campaign.  Despite a concerted effort by US and other international counter-narcotics teams, production has steadily increased, with the recent years harvests in producing bumper crops.

There had been a ‘Brit Mil’ presence in Helmand since 2006, but in late 2009, plans were made by International Security Force Afghanistan (ISAF) commanders to launch a major offensive in the area.  The attack – codenamed Operation Moshtarak, or the Battle of Marjah – was scheduled for February 2010, and consisted of a combined force of 15,000 British, Afghan, US and other coalition troops – the biggest contributor being the United States Marine Corps (USMC) – and holds the record of being the largest joint action of the Afghan War.

Operation Moshtarak was counterinsurgency (COIN) on a huge scale.  Its mission, to find and destroy the Taliban, and to deprive it of the resource it needed to fund its terrorism.  No poppy no opium, no opium no heroin, no heroin no guns, no explosives, no money to pay the fighters.  It was spread over four operational phases: phase one to find and engage the enemy, phase two to secure and hold the ground, phase three stabilization, and phase four transition to exit, or put a more colorful way by one Marine Corps officer, “getting the f**k out of Dodge”.

The Helmand area of operation (AO), had always been run by the British from the provincial capital of Lashkar Gah.  But when the Jarheads arrived with their gung-ho, plain talking attitude, certain Foreign and Commonwealth (FCO) bureaucrats – with their tan chinos and blue checked shirts – were a tad taken aback.  I didn’t get involved with the political infighting.  I was a British ex-Para, working for the Americans and my job was hard enough – making the Government of the Islamic Republic of Afghanistan (GIRoA) look good.

Visiting Marjah was like stepping back several hundred years in time, the only visible changes to this bygone age, being mobile phones, the occasional motorbike and the ubiquitous Toyota corolla.  The Taliban who had controlled the area for over two decades – despite the vast money that they had received for lording over the province -had put nothing back in.  The schools were rundown, and the ones that were left had been taken over by the Taliban fighters.  Health clinics had closed, and in the absence of a recognised government things had basically fallen apart.  My job was to rebuild the schools, pave the roads, open the clinics, create work and generally show the population the benefits of accepting GIRoA, with the overall aim being to switch their allegiance away from the Taliban and towards presidents Karzais fledgling government.

The face of GIRoA in Marjah – the man who was to take the accolade for my endeavors – was the district governor.  I did not have the pleasure in meeting the first Governor of Marjah – a man who was apparently languishing in a German prison when he received the call from the President – as he had been murdered by the Taliban by the time I got there.  But I did work closely with his successor, a big brute of chap who thought nothing of beating up local contractors, if he thought they were being a tad ‘shy’ with their contributions towards his retirement fund.

Slowly but surely the infrastructure was re-built.  School kids could be seen each day making their way to the newly opened schools – proudly wearing their brightly coloured backpacks.  Trade flourished in the refurbished bazaars – with the produce from the fields being easily transported on the paved roads, and queues appeared outside the doctors’ clinics.  But the Taliban – who were never far away- could see they were loosing, their strangle hold on the population slackening, as the hearts and minds of the people of Marjah were won over.

The Taliban fought back with hit and run tactics, using small forces to engage the Marine patrols.  Their favorite weapon being improvised explosive devices (IEDs) -home made bombs – that were place alongside the roads, and exploded against passing vehicles and dismounted troops.  They were crude but effective, and ensured that there was a steady trickle of Stars and Stripes draped caskets heading states-side.

In all I spent 13 months embedded with the USMC at the Marjah Governors compound.  I was ‘cut a lot of slack’ being an ex-Para by the Jarheads, but was repaid with merciless ‘banter’, as is the way between brothers at arms.  When I left, the job was still ongoing – a work in progress, but something I was proud to be a part of.

I look back on it now as one of the most enriching experiences of my entire life.  The small compound that was crammed with military hardware – but void of creature comforts, possessing a far more valuable asset, that of camaraderie.  The bond that you can only find in a place where men are tested to their limit and beyond.

In memory to the guys who didn’t make it back.  Lest we forget.