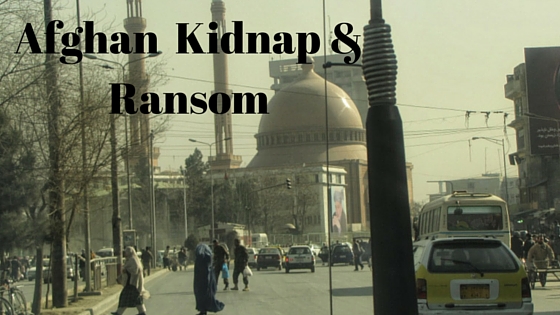 Katherine Jane Wilson a member of the Zardozi charity is another victim of Afghan Kidnap and Ransom. The 60 year old snatched from her villa in the eastern city of Jalalabad (J’bad) in the early hours of 28th April by armed men in uniforms.

There is little information at present, but there is enough for a few important points to be highlighted. Using my six years of practitioner experience in Aghanistan – one of which was spent in J’bad, and my involvement in a number of kidnap for ransom (K&R) cases,  I’m going to discuss the recent abduction to see if there are any lessons learned that can be used to benefit other organisations working in the region.

Ms Wilson who has worked in the country for nearly 20 years was involved in a women’s  empowerment programme in Nangahar – one of the countries eastern provinces – the population almost entirely consisting of members of Afghanistan’s largest tribe, the Pashtuns. You might be of the opinion that teaching women to sew is a benign act, but not so. It has inherent danger.  As in a male dominated environment it can be seen as interference, something that I found when I was involved in a similar programme in Helmand. Point one, be aware of the situational context of the programme, ensuring that it does not interfere with the cultural norms or aspirations of the local populace.

Ms Wilson arrived in J’bd the day before the the abduction, staying at a prearranged location which I’m assuming she used previously. At 4am the kidnappers arrived, made a B line for her and then left. There is no doubt in my mind that information was passed to the abductors of her arrival by someone close to her. It is a common theme present in all my K&R cases. The Afghan police also know this, the eight arrests that have been made resulting in their investigation including staff from the villa, testament to this modus operandi. Point two, ensure that the people that work for you are screened by security.

There are ways to check on your people and it doesnt have to be obtrusive. Your organisation might well have access to the comprehensive databases that have been developed in Afghanistan by the security forces. Another way would be to get an assurance from the candidates tribal elder or imam that they are of good character. The latter might sound thin, but in a society governed by Pashtunwali (the code of the Pashtun) the word of an individual is taken very seriously.

Ms Wilson’s security when needed most was found lacking, it did not survive contact. Why was this? Again not enough information to make an informed decision, but bear with me as I try to explain the concept of NGO security strategies. There are three strategies commonly used: protection, deterrence and acceptance. I don’t want to bore you with all the technical stuff, but what this boils down to within an Afghan context is whether you security is armed or not.

NGOs like to use the acceptance strategy, its a softer approach and doesn’t use weapons, the  tactic utilising the local population in providing protection. For example; an aid worker imbedded in the community, working on their behalf, producing tangible results would be of great benefit to the populace and as a result the community would want to protect them – keep them out of harms way. But this strategy only works if the community in question is able to control the area, the methodology working well in villages in Africa. The effectiveness of using this tactic in J’bad – a city with a population of 350,000 – while delivering a possibly contentious women empowerment programme might not be the best solution. Point three, does your security match the current threats? Is it fit for purpose? Sometimes using the acceptance strategy is like taking a knife to a gun fight.

From the evidence provided by Tolo news I was able to identify the villa as a guest house in Police District 2 of J’bad, just off the Chaprahar Rd. I know this place well as I had stayed in it on many occasions, on each visit – anxious of the vulnerability of the site – taking a AK-47 to bed with me just in case. I raised my concerns with the organisation that I was working for at the time, but was ignored. In October 2010 the compound was attacked. The Taliban using explosives before initiating a gun fight with the security team, who luckily in this instance were armed. Point four, choose secure accommodation that has sufficient security provision. In Afghanistan security at locations is often provided by the local police force who are happy to augment existing security measures.

Those of you familiar with health and safety
legislation will know that if you identify a risk you own it, and have to take steps to mitigate against it. Risk management in high threat areas is exactly the same. Just because an individual has chosen to expose themselves to a greater degree of danger doesn’t mean that this principal can be ignored. The legal defence of an employer citing violenti non fit injuria – the individual accepting the inherent danger – unlikely to be looked upon favourably if it was tested by jurisprudence.

Experts are citing that there is evidence to suggest that incidents of K&R are growing exponentially on an international basis. Looking through the optic of Afghanistan this would seem to be the case, with members of humanitarian organisations being the prime targets. For example two members of the German organisation GIZ were kidnapped in 2015. This evidence can not be ignored, the stage has been set. Organisations that do nothing or little, doing so at their own peril, the consequences severe.

As well as the horrific personal cost to individuals and their families involved in K&R there can also be an impact on the organisation. Take for example the case of Steve Dennis. Mr Dennis was working for the Norwegian Refugee Council (NRC) in Kenya when he was kidnapped. Despondent at the way he was treated by NRC he sued. The result in December 2015 was a landmark ruling that was heralded as a wake-up-call for the NGO industry. He was awarded 4.4 million krone, NRC publicly admitting gross negligence.

I would like to stress the point that I am in know way insinuating that Zardozi was at fault in Ms Wilsons abduction. Also, as someone who audits security policies and procedures for organisations, I dont want to seem judgemental on Zardozi security provisions, as in not knowing all the facts it would be wrong of me to do so.

So why then am I bothering to publish this article. My answer is simple; as a practitioner I believe that any relevant and time bounded information in the field of security needs to be made public, so that other organisations can learn from belligerent actors tactics, techniques and procedures (TTPs). In doing so, establishments can then adapt their security provisions accordingly, thus ensuring that there is sufficient resilience in the operational platform to deal with even the most extreme of incidents.