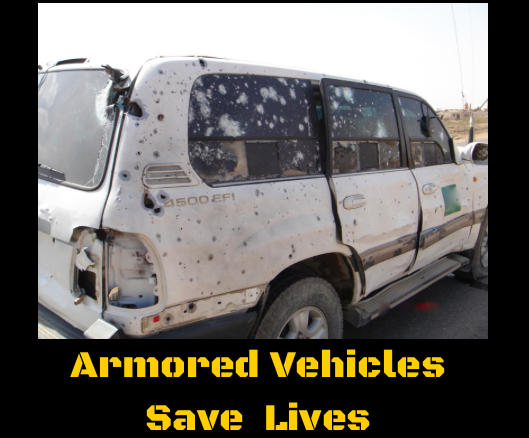 Armored Vehicles Save Lives. I think so, and the world would be a very different place if the use of armored vehicles had been more accepted by world leaders in the last century, the course of history altered by assassinations in cars that that could have been easily avoided.

Take for instance the assassination of Archduke Franz Ferdinand in 1914. Gravilo Princip – the Serbian gunman – able to shoot easily into Ferdinand’s open top automobile. The Archduke and his wife, easy targets, both dying from gunshot wounds. The incident was the catalyst for Austria declaring war on Serbia, the outcome of which was the First World War.

Then there is the murder of John Fitzgerald Kennedy (JFK) in Dallas 1963. The event that has now become shrouded in mystery, and rife with conspiracy theories, caught so graphically with bystander cameras. However both tragic instances could have easily prevented if the occupants had been in armored vehicles.

The use of armored vehicles is no longer reserved for a privileged few however. In my world their part of every day life – an accepted norm. Their use often stipulated by organisations, who, in complying by their insurance company protocols, are insistent that their staff are provided with the maximum possible duty of care.

It is no wonder that their use has become more prominent. Small arms proliferation – the term given to the flooding in fragile environments with all sorts of weapons – has become widespread. The threat of close quarter assassination (CQA), a very real concern to those doing business in these less conventional settings.

The Toyota Land Cruiser, is utilised more than any other vehicle as a platform by manufacturers wishing to ensure safety for their passengers. The ‘up armored’ vehicle now legend within the security industry for its ability to both protect, whilst transporting its occupants through the toughest terrain.

The normal variant is provided with ballistic rating (BR) 6 – or B6 for short. It allows protection for normal 7.62mm ammunition – the most common. But does not cover armouring piecing rounds. For that you need B7.

But with the increase of improvised explosive devices (IEDs) – or roadside bombs – another huge advantage has become evident for armored vehicles; they can also protect against explosions.

Take for example the new type of magnetic IEDs (Mag- IEDs) that are being used by the Taliban in Afghanistan. The relatively small explosive device is packed with between 2-3 kg of potassium chlorate, high explosive – in common use as the stuff that makes matches catch fire – and is easily attached to a vehicle during rush hour traffic. The resulting explosion is going to ruin your day no matter what, but being behind bullet retardant steel and thick polycarbonate glass, greatly reduces the risk of fatal injury.

Given the benefit of hindsight, I’m sure JFK and the Archduke would have rethought their travel plans. The question is: are you?