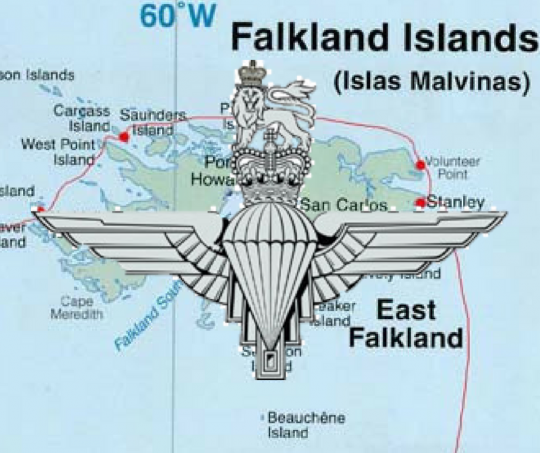 It was the morning on May 28th, 1982. The battle for Goose Green, the first of the Falklands War,  had started the night before with a naval bombardment. A and B companies of 2 PARA, had advanced from their start line at the base of the isthmus connecting the two Falkland Islands towards Darwin Hill, but the attack had faltered. The momentum – so crucial in an infantry assault – had hesitated under withering fire from the Argentinian positions. 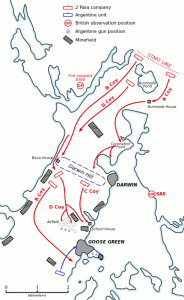 As dawn broke on the cold, windswept, South Atlantic hillside, the paratroopers found themselves up against an Argentinian force that was ‘dug in,’ well prepared and aware of the appending attack, alerted by over zealous reporting by the BBC.

That morning saw incredible acts of bravery. Lt Col H Jones was awarded the Victoria Cross (VC) for leading an attack that resulted in his death; with another 17 members of 2PARA being killed in action and 64 wounded. One of those killed was my friend, Stephen Illingsworth.

I met Steve when I joined the Parachute Regiment at Browning Barracks, Aldershot – better known as depot PARA – in September 1980. We were both in 467A Platoon (1980-81). Over the next six months we became best of friends. Our camaraderie forged over long TABs (tactical advance to battle – speed marching) over sodden Welsh hills, long sleepless nights in trenches filled with water, and gruelling PT sessions that left our lungs gasping for oxygen. We chunted to each other endlessly, but we didn’t give up like so many did. We gave each other mutual support, we helped each other survive through the grueling training.

My best memory of Steve was during an exercise in Brecon. We’d basher’d up in a forestry block for the night, a defensive position. The platoon staff waited until we got into a routine and they started to throw the thunderflashes. As the explosions erupted all around we attempted to brake contact, a fighting withdrawl. Steve had taken off his boots – a complete no no – and in his haste had put them on the wrong feet. With a bergen on his back and his sleeping bag stuffed down the front of his para smock, he kept up as we ran for two miles, each section taking it in turn to put down suppressive fire on the platoon staff who chased us mercilessly through the inky black, Welsh winter night. When we got to the RV we fell on the floor exhausted, but my fatigue couldn’t suppress my laughter when I saw the state on Steve, so funny…

Anyone that has been put to the test by physically demanding courses will tell you that theirs was the hardest. Many military units have selection process’s, each – if you listen to the member – harder than their rivals. I don’t want to get involved in this testosterone argument, but I just want to share a reality with you. Out of the 60 – 70 recruits that started in Depot Para with 467A platoon in September 1980, there were only a handful left that got through to Brize Norton and the Parachute Training School the following February. The picture below is of Steve at Brize, I too have this picture as I’m standing right behind him – I’ll update the post with the full picture when I find it.

After you’d got your wings, each recruit was allowed to submit a request to join one of the three Parachute Regiment battalions. Both Steve and I picked 2 PARA. He got his request, I didn’t. Because of manning shortages I went to 1 PARA. I remember the last time I saw him, it was at the pass off parade. He got so drunk that he lost all his money. The guys had a whip-round though, we replaced it. That was it, we both went our seperate ways.

On the morning of the 28th May, 5 platoon, B Coy, 2 PARA was pinned down, was running low on ammunition and had taken casualties. Steve ran forward from cover, exposing himself to accurate Argentinian fire to rescue one of the platoon who’d been hit. Retrieving the casualty he then went forward again to recover the much needed ammunition. It was then he was hit. His citation reads:

“In these two acts of supreme courage Private Illingsworth showed a complete disregard for his own safety, and a total dedication to others. Whilst his action in coming to help of a wounded soldier may have been almost instinctive on seeing the plight of his comrade, his move forward to collect much needed ammunition for his beleagured platoon was a display of cooly-calculated courage and herorism of the highest order.”

Steve was awarded the Distinguished Conduct Medal (DCM) – one notch down from the VC – but there are those who cite that his actions warranted the highest award. I learned of death via the front of the Daily Mirror, the grainy black and white picture of his smiling face leaping out at me, its effect like a body blow, brining the anguish that only death can inflict. Some might have been suprised at Steves bravery, I wasn’t.

Its 35 years since Steve committed his incredible act of bravery. As we remember, my thoughts are with his family and with the families of those those gallant young men who gave the ultimate sacrifice and won a war that no one expected or believed they could.