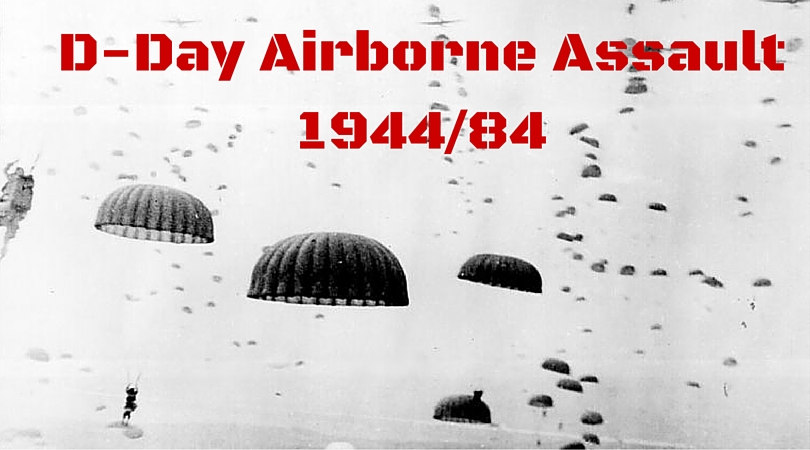 Five hours before the landing craft of the Allied invasion force hit their target – the Normandy beech heads – 23,000 paratroopers from the British 6th Airborne Division, American 101st and 82nd Airborne Divisions and 1st Canadian Parachute Battalion, boarded aircraft in airfields throughout southern England for the hour long flight to Normandy, and the start of the D-Day Airborne Assault. Their mission was to be dropped behind enemy lines at either end of the beachheads to protect the flanks, and to exploit any opportunity to attack German targets.

The Germans had expected the main Invasion to take place at the Pas de Calais – the shortest distance between Britain and France – but the Allied Commanders opted for Normandy, which was less heavily defended but still within within range of air cover.

Parachute soldiers are lightly armed and rely on speed, surprise and aggression to achieve their objectives – which are invariably to take and hold enemy positions until relieved by the ground forces. However the  resolve of the courageous men who jumped into the night sky over Normandy on 6th June 1944, was tested to its limit.

Paratroops after being dropped need to re-group quickly in order to become an effective fighting force.  This is practiced by the troops over and over again, the men quickly reorganising themselves on the drop zone (DZ) before advancing to engage with the enemy.  But although not as deliberately defended as other locations in northern France, Normandy’s defences as part of the Atlantic Wall were still a formidable obstacle.

The Germans had flooded much of the low lying fields and had positioned obstacles in open areas to stop gliders from landing.  But by far the most deadly defence was the antiaircraft fire.  Tracer rounds – bullets filled with phosphorus a chemical that burns when exposed to oxygen – arced into airspace, their trajectory illuminated by green, yellow and red streaks that tore  the black evening sky apart.  But for the men who survived the Nazi fortifications,   jump and glider insertion, their work had only just began.

Scattered and disorganised, men quickly banded together, their training and discipline allowing them quickly to become small potent units that took the fight to the enemy.   The names of the engagements at  Breville, Ranville, St Mere Eglis, Merville and Pegasus Bridge – places names that are now remembered on silk flags as battle honours –  to them, settings where young men risked all, and changed the course of history.

In 1984 to mark the 40th Anniversary of the D-Day landings, my unit, B Company, 1st Battalion The Parachute Regiment was chosen to accompany the 82nd Airborne Division, in their jump into Normandy to commemorate the historic event.

The American paratroops enplaned at Fort Bragg, North Carolina.  Their feet only touching terra firma again when they jumped from their huge C-5 Galaxy on to Everleigh DZ on Salisbury Plain –  the only drop zone in the UK  that could take the huge payload of 330 paratroopers.

Although we were their hosts, it was very much a US show as it was their aircraft and ‘chutes that we would use for the insertion.  To keep it authentic as possible, our American brothers in arms used Greenham Common – at that time a US Airforce Base – near Newbury, Berkshire as the enplaning point, as it was one of the locations used for the Airborne Assault.  After a few hours of ground training on the US, T-10 parachutes, we packed our containers and marched onto the waiting  C-130 Hercules, destination, Normandy.

We jumped onto the original DZ that the 101st Airborne had used for St Mere Eglis, but  it certainly wasn’t the rolling hills on Salisbury Plain that we were used to.  The bocage of Normandy, trees, roads and ditches, soon became unwanted obstacles to men, who had little control of their military ‘chutes.  I managed to land ok, but the guy behind me in the stick wasn’t so fortunate and landed in a tree.  All our worries were soon to be put behind us though.

As I pulled at my rigging lines to deflate my canopy, I was approached by a French re-enactment guy, dressed in a WWII American uniform who saluted me, and thrust a cold can of Kronenbourg into my hand.  Not to drink would be rude, I thought, might cause an international incident.   So as my new friend – who was now insistent on helping me – busied himself with packing away my parachute, I downed my can, stepped out of my harness, pulled my head dress out of my smock pocket, and to the applause of the now assembled crowd, placed it squarely on my head.

As I was patted on the back and made to drink more beer, I remember looking up as a tight formation of  c-130s thundered across the blue sky a thousand feet above me.  Revelling at the sight, as hundreds more parachutes emerged like small puffs of smoke from the sides of the drab painted aircraft.  My memory is as clear now as it was then.   A feeling of immense pride of being part of the jump and a member of the Parachute Regiment.

Over the next week we were kept busy visiting the sites of large and small actions.  The battle field tours made more remarkable as we received blow by blow accounts of the actions, by the men who had actually taken part in the fighting.  Men like Major John Howard, who led the attack on Pegasus Bridges, and less salient, but equally heroic privates and non commissioned officers, who could still point out where their trench had been, and even their arcs of fire.

It was a truly humbling affair – the poignancy added to by the interaction with the veterans.  Something that I carry with me, and will pass on to my children and grandchildren.  For as the time passes and the years encroach, the roll call for these gallant men grows shorter and shorter, so it is now up to us to ensure, that the story of these brave young men doesn’t fade.

When you go home, tell them of us and say. For their tomorrow, we gave our today.  JM Edmonds